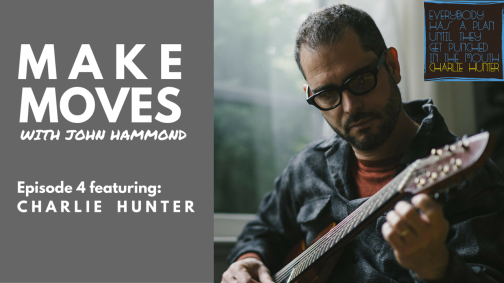 In Episode 4, Charlie Hunter sits down with John to discuss how his life decisions have shaped him as a musician, what it is like to straddle the line between being an artist and a family man, and he gives a quick intro to his new album Everybody Has A Plan Until They Get Punched In The Mouth, which was recently released on GroundUP Music.  Get the full interview HERE on iTunes, HERE on Stitcher, or Download HERE.

During the interview, Charlie makes a quick reference to Ted Greene.  An aside: Ted was John’s guitar teacher.  To help understand Charlie’s comment, you can learn more about Ted’s legacy here.

Episode 4 was recorded live at McCabes Guitar Shop in Santa Monica, California.  Special thanks to Brian and Lincoln for providing a space to do the interview.

Special thanks to Noah Zisser for his audio engineering on this episode.